Pierre Bonnard: The Colour of Memory

This week I visited the Bonnard exhibition at Tate Modern, London. The work of the French artist Pierre Bonnard (1867 – 1947) doesn’t fit easily into any well-known genre. His loose, sketchy style in some ways resembles that of Monet (whom he knew) yet uses a vivid colour palette more like that of Matisse or Van Gogh.

I’ve loved his work for a long time but had only seen images in books. When up close, I was surprised to see how roughly the paint was applied – in school one might have been criticized for ‘painting badly’ – yet they are masterpieces. Bonnard created sensuous images of everyday life. He sketched outdoors but painted from memory in his studio. He often divided his canvases by horizontal, vertical or diagonal lines. Perspective is flattened and there are blocks of decorative pattern. 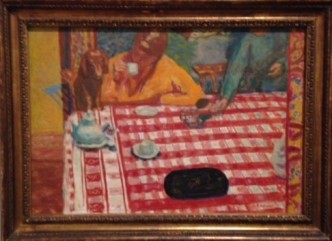 In the picture above, Coffee (1915) the tablecloth takes up most of the canvas while the head of the woman on the right has been cut off. The paint is applied roughly – almost scribbled on (see details below). 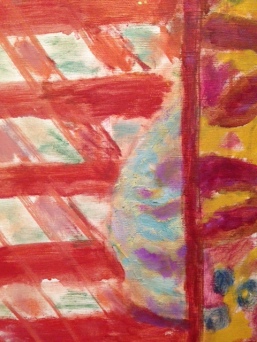 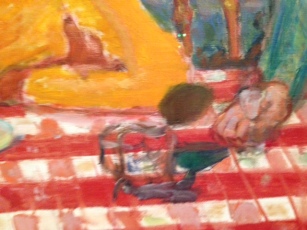 Another example of Bonnard’s sketchy style in Girl with Goat (detail): 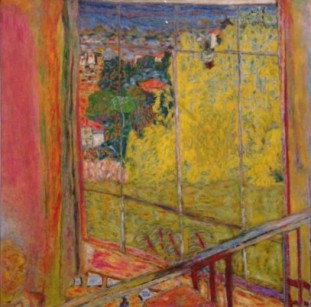 Bonnard included his wife Marthe in many of his paintings. An unconventional couple, they lived together for 30 years before marrying. Many paintings feature Marthe in the bath, always as a young woman and often surrounded by pattern and decoration. 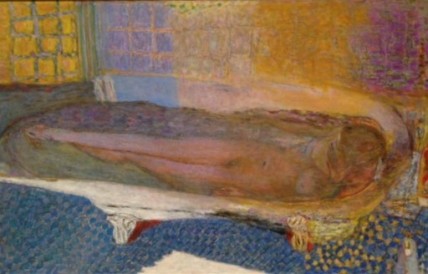 There are 100 works in the exhibition with an excellent audi-visual guide. Recommended!